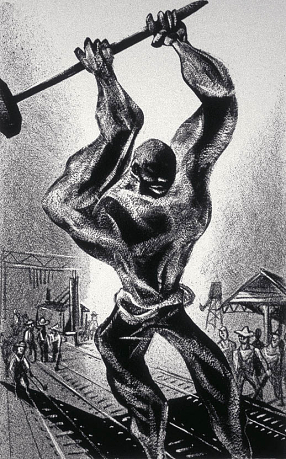 The legend of John Henry stands strong in American Folklore. Legend has it that Henry’s prowess as a steel driver was measured in a race against the new steam powered hammers being used to drill into rock to make holes for explosives to blast tunnels for the railroad back in the late 1800’s. In a battle of man versus machine, Henry outdueled the steam powered technology, only to die in victory with his hammer in his hands as his heart gave out from the stress. Where it actually happened, or if it even happened at all, will always be in debate but the legend will always be a firm reminder of how technology finds itself taking over tasks previously done by hand. (Image: John Henry, from the series American Folk Heroes, n.d., William Gropper. Data Source: Smithsonian American Art Museum)

What does this legend have to do with TLC and stewardship?  For one thing, I love the tale and will always slip this legend into conversation where it fits. Secondly, we’ve began Phase II of our White Pines Nature Preserve trail building project. A John Deere excavator finds itself on point for phase II of the project, making it comparable to a man versus machine moment.

Phase I of the project was all hand-built trail, taking approximately 250 hours of volunteer and staff time across 12 different workdays throughout the spring and early summer. After all the dust settled, about 2,200 feet of new trail was laid out by hand. This averages out to a speed of 8.8 feet per hour for hand built trail in Phase I (2,200 feet divided by 250 hours). An average stride is just over two feet, so we built approximately four steps per hour, or two steps if you’re tall like me. Phase II goes from a gentle side slope to a steep slope requiring a significantly larger amount of digging to create the trail. While these conditions would have drastically slowed the pace (probably by half or greater) of hand dug trail, we’ll compare them as it is. Phase II was completed by machine in roughly 110 man hours and is about a half mile, so that’s 2,640 feet. Doing the math with my trusty calculator, we averaged 24 feet per hour, nearly 3 times faster than hand dug trail.

These numbers may not be as technical as baseball statistics, but they do paint an interesting picture. When you manage any resource, you must be flexible and smart in the tools you use. I didn’t throw these numbers down to say all trail should be machine dug, and I hope our awesome volunteers don’t think that right now. We have six open preserves with trails, and two more opening in the upcoming years. Part of utilizing resources in our trail work involves looking at projects and understanding if our volunteers are capable of handling the task, or if volunteers and staff alike would burn out quickly from digging nearly a foot into the side-slope to build sustainable trail. Put deadlines of grants and funding in the mix, and you have yourself quite the management puzzle. But hey, if it were easy, there’d be no fun in doing it, right?

Nevertheless, I encourage you to go to White Pines Nature Preserve and check out the amazing trail system we have down there. The White Pines trail branches off the main kiosk (with the maps) and the newly routed Gilbert Yager Trail enters the woods just down the parking area at the second kiosk. Thanks to the new trail signage recently installed throughout the preserve by a local Boy Scout Troop (thank you Troop 806 from Sanford!), you’ll easily find your way down the mountain-like slopes to the Deep and Rocky Rivers. With white pines towering around you, a few longleaf pines dropping their huge cones, and beautiful mountain laure, all within sight of our new trail, you’ll enjoy your trek through one of the most unique trails in the Triangle. When you do, let me know what you think of our work! Send your comments, reviews, or reports of any issues to [email protected]