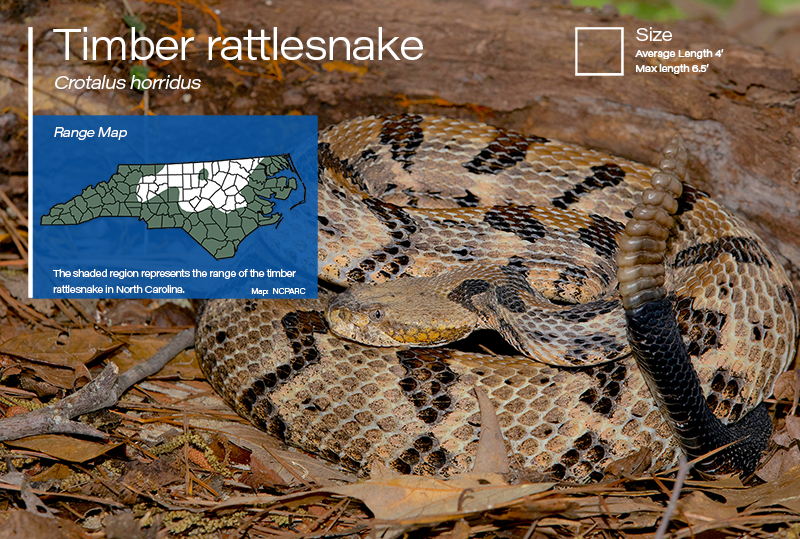 So far, TLC staff hasn’t actually seen a timber rattlesnake on the newly conserved, Rattlesnake Range but that’s how we, or at least some of us, prefer it. This 76-acre property in northern Durham County is the third acquisition made by TLC in partnership with the National Guard Readiness and Environmental Protection Integration (REPI) program’s efforts to create an Army Compatible Use Buffer around Camp Butner. For the military, these properties offer a buffer between encroaching development and the training of Soldiers, Airmen, DoD Agencies, Civil Authorities, and Civilian Marksmanship Programs. For TLC, these properties offer critical habitat connectivity in some of the most interesting ecological corridors in our region.

Rattlesnake Range is connected to 127 acres of land owned and protected by fellow land trust, Tar River Land Conservancy in Granville County, where timber rattlesnakes have been sighted. Most common in the mountains and Coastal Plain, timber rattlesnakes have all but disappeared from most of northern Piedmont, where most of their habitat has been destroyed. Only a small population of them remain in northern Durham and western Granville Counties. Previously used for forestry, the newly dubbed Rattlesnake Range will now be managed to optimize it as a habitat and provide a safe corridor for wildlife to move safely to other undeveloped areas and Camp Butner and perform their ecosystem functions.

TLC’s conservation criteria and strategic action plan goals place a high value on the presence of rare species or habitats on a property we are considering conserving. Connectivity, or a property’s proximity to other conserved lands, is another critical consideration. Without connectivity a habitat becomes fragmented, wildlife’s movements are severely restricted, and ecosystem functions are compromised. By leveraging REPI funds to target properties within the Army Compatible Use Buffer TLC is able to conserve important connectors that provide wildlife movement corridors and access to much larger habitats.

The 4,980 acre Camp Butner Training Center is used regularly for training but remains in a mostly forested state with ten documented Element Occurrences of rare plants recorded by the NC Natural Heritage Program including Crested Coralroot, Low Wild Petunia, and Wiry Panic Grass. Black bears also frequent Camp Butner and the surrounding properties, including a 55-acre tract north of the artillery range purchased by Triangle Land Conservancy in 2019 with funding from the NC Land and Water Fund in addition to the National Guard. In 2020, TLC used REPI funds to purchase 40 acres adjacent to NC State’s 2,690 acre G.W. Hill Forest. All 171 acres of these three properties and the streams that flow through them are upstream from Falls Lake, the drinking water source for the City of Raleigh, which funds TLC’s staff time spent in this priority area. Through this partnership, TLC has leveraged federal funds to conserve corridors critical for the survival of local species by extending the reach of thousands of acres of existing habitat conservation.

If you take a look at our properties, you’ll notice that Rattlesnake Range is not open to the public. You won’t see a map or a visitor guide to Rattlesnake Range, nor will you receive an invitation to visit. While our 8 public nature preserves serve to connect people with nature, thousands of acres TLC owns and manages, like Rattlesnake Range, are just for nature itself. When you observe how natural systems change with human disturbance, you can appreciate why TLC attempts to limit how much human involvement is allowed on some of the properties to let nature run itself, so to speak. And if the timber rattlesnakes keep hiding from staff, that’s ok too.